From ‘Off the Sidelines’ by Senator Kirsten Gillibrand

Asking for votes and support, negotiating for bipartisan agreement in the Senate, speaking up for the victims of sexual harassment in the military, then cooking dinner at home for her toddler sons at the end of a long, hard day. New York Senator Kirsten Gillibrand does it all with determined courage, near-evangelical confidence and the tenacity of…a honey badger. 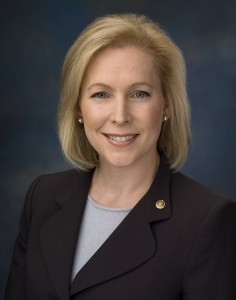 After reading her memoir Off the Sidelines, I’m moved and inspired by her tireless quest to be the voice for the voiceless and to fight the lost causes. She was influential in repealing ‘Don’t Ask Don’t Tell’ the policy that banned gays from serving openly in the military, and providing health care and compensation to the 9/11 first responders and community survivors who are sick with diseases caused by the toxins at Ground Zero.

Her book and her example are a strong call to action for women to speak up, get involved, and ask for change. I feel challenged to think bigger and take bolder action. It makes me wonder, have I done enough? What more can I do? Who else can I help?

It’s like being shoved out of the mindset of complancency; it feels uncomfortable, not unlike when I have to muster the courage to negotiate.

Speaking of which, negotiating at work can be awkward even for Senator Gillibrand. Take for example, the excerpt below where she describes how she lobbied her boss, the president, at a holiday party:

In 2010, the White House Christmas party happened to be right before the vote on the 9/11 healthcare bill, an issue that pulled on my heart and sense of justice as fiercely as anything had in my life. I’d promised the first responders and their families that I’d fight for them with everything I had. So there I was, in a blue strapless gown, standing in an endless line to wish President Obama a merry Christmas…

We decided we would use the holiday face time to lobby.

For the hour Jess and I stood in line, I kept second-guessing myself, asking whether Jess thought it was rude or obnoxious to spend my thirty seconds with the president at the Christmas party to urge him to throw his weight behind ensuring that our 9/11 first responders got their due.

“Do you really think it’s okay to bring up my bill?”

“Yes, Kirsten, you should bring up the bill,” said Jess patiently, at first.

“I’ll ask him to call Senator Enzi–he’s still considering whether to support the bill.”

“Is it rude?” I asked, feeling insecure again. Lobbying here among the fancy Christmas trees was clearly off script.

Finally I got to the front of the line, to our commander in chief in his tuxedo and Michelle Obama, impeccably dressed as always, in a red ball gown. I didn’t even leave the president an inch to say, “Merry Christmas.” I just gulped down a chestful of air and started talking a mile a minute. “Mr. President, I’m working really hard on the 9/11 healthcare bill, and I really need your help, and if you could just call Senator Enzi–”

The president broke into a bemused smile. “Kirsten…Kirsten…happy holiday.” His body language urged me to please slow down.

from Off the Sidelines

Guest Post from Talley Henning Brown: What I Learned from ‘Improv Your Way To Negotiation Prowess’