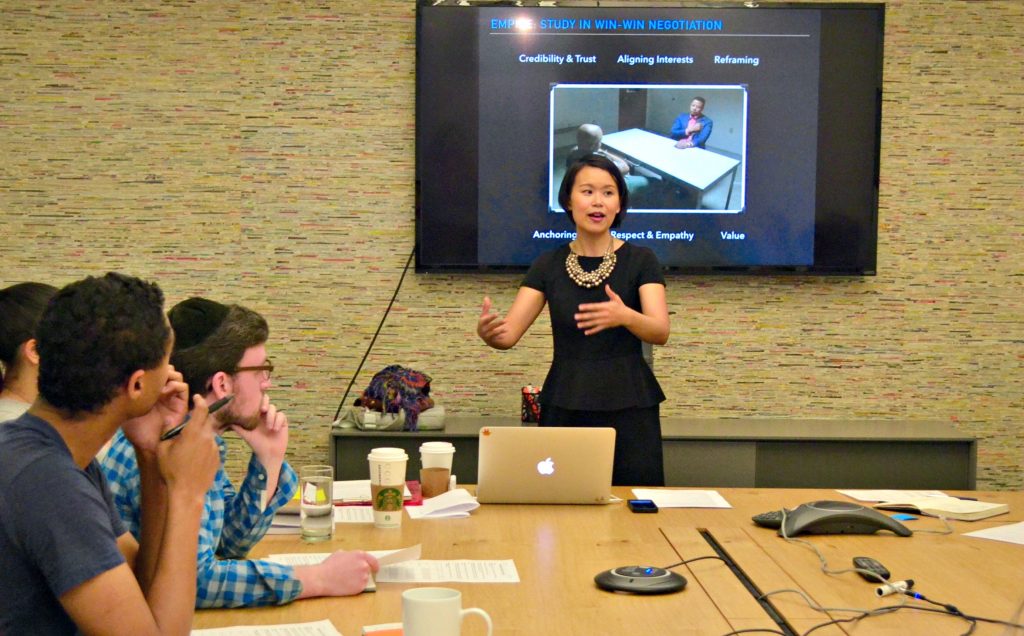 Yours truly speaking at Essence Digital. Photo by Jackie Harshman.

I love watching TV because it allows me to see various, sometimes outrageous negotiation situations play out, all from the comforts of my couch.

I began to watch TV shows with a deeper appreciation for this after a conversation with Julie and Casey of Vital Voice Training. (Go check them out!)

They told me how, in every scene, characters with opposing viewpoints engage in dialogue, each vying to achieve their own goals. Often that dialogue is a negotiation (and you know how I love a good negotiation).

Recently, my life partner Charlie has been re-watching cult-favorite science fiction show Battlestar Galactica on Hulu. Last week I joined him on the couch for episode 7, titled “You Can’t Go Home Again.”

Near the end of this episode, there is a pivotal scene in which one of the heroes, President Roslin, speaks truth to power and negotiates with difficult people to affect positive change. I really enjoyed this and wanted to share the nugget of negotiation wisdom in this scene with you.

First, let me set the scene.

As in every episode of BSG, there is a post-apocalyptic crisis. Starbuck, audacious space pilot, has been stranded on a barren moon with no oxygen reserve.

Back on the mothership, Commander Adama and his son, Captain Adama, plan a do-or-die mission to rescue Starbuck, risking the entire fleet and lives of 45,000 humans.

As soon as President Roslin gets wind of this, she confronts the two men and rebukes them, in an attempt to get them to change course. She makes a rational argument backed with facts. The mission has already expended nearly half of fuel reserves — “unacceptable,” she says. But Commander Adama won’t budge. He persists, saying that “the recovery of one pilot is military matter.”

I’ve never been in outer space or on a battleship, and I hope to never experience a post-apocalyptic world. Yet the conflict between President Roslin and Commander Adama is a familiar one.

That’s because Commander Adama is an archetype. The domineering leader who, blinded by power and emotion, uses his position to force his will on his subordinates. In other words, a powerful bully.

This exchange between President Roslin — the unproven leader of a makeshift government, or the underdog in this scene — and Commander Adama reminded me of the few times in my career when I confronted a powerful bully and was shot down.

I didn’t win the argument. I didn’t save the relationship either. I didn’t negotiate effectively.

For us mortals living IRL (in real life), the stakes in negotiating with difficult people in positions of power are extremely high. While the fate of the entire human civilization may not depend on the outcome, but it can certainly feel like the fate of our careers does.

So how does President Roslin, who in an earlier episode was running government meetings and issuing orders alone, who has limited power, negotiate with Commander Adama?

Commander Adama: “Crap.” “Unacceptable.” Whatever it is you feel about this, the recovery of one pilot is military matter.

Now if two of you, of all people, can live with that then the human race doesn’t stand a chance. Clear your heads. [President exits the room. Commander and Captain exchange a meaningful look.]
Captain Adama: [Picks up the phone] Combat. Standby. [Hands the phone over to Commander Adama]

Commander Adama: This is the commander. Terminate search operations. Bring everyone home.

President Roslin changes tactics. Instead of rebuking and shaming, she shows respect and trust for the two military leaders. She concedes on the point that the decision is military. And with this strategic concession, she enables the two men to see her point of view. This way she allows them to do the right thing in a way that allows them to save face, or retain respect without humiliation.

In the book Getting Past No by William Ury, this negotiation strategy is described as building a golden bridge for the opponent to retreat across without losing face. This works for President Roslin because she trusts the honorable men to do the honorable thing, which is protecting the lives of 45,000 people.

Early in my career, I didn’t know anything about building bridges. At a deeper level, I didn’t trust the men in power. This showed in the way I confronted them without considering how they may be humiliated by an underling calling them out. Humiliation is a powerfully negative emotion.

Don’t get me wrong. You’re not responsible for anyone’s feelings except your own.

Come check out the new site!